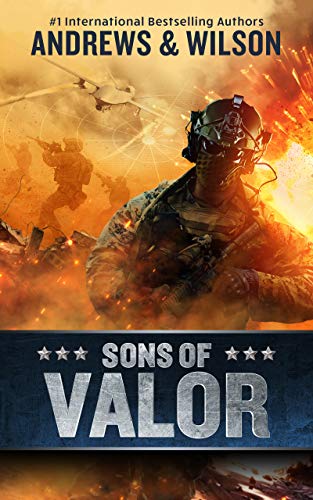 In this episode of The Military Wire, we unpack how International best-selling authors and elite Navy Veterans, Brian Andrews and Jeff Wilson, of the military thriller and action Tier One series, may also be predictors of the future aside from great storytellers.

With America still recovering from a pandemic, emerging from an economic crisis, and now battling cyber-attacks, Andrews and Wilson tackle a new, emerging threat in their latest book, out JUNE 2021, SONS OF VALOR.

Navy SEAL Keith “Chunk” Redman has been one of the military’s top door kickers since the day he pinned on his trident: loyal, single-minded, lethal. Tasked to lead a new, covert team of Tier One SEALs—the most elite special operators in the world—Chunk needs help to stay a step ahead of its adversaries.

Brilliant at spotting patterns in the data that others miss, ex-CIA analyst Whitney Watts sees evidence of a troubling link between illicit Chinese arms sales and an attack on a US military convoy in Afghanistan. If she’s right, it would portend not only massive casualties, but a devastating threat to global stability.

Andrews and Wilson share in the interview how they keep their stories relevant and moving. Both having served in the U.S. Navy on assignments often hidden from the public, they share how fact and fiction both fall in the grey zone but assure the listener that no individuals or missions are ever revealed or compromised in their writing.

This latest book is a sit-on-the-edge-of-your-seat read. Fast-paced, authentic, and causes one to pause. Is the enemy closer than we think to creating global instability. Be sure to check out Andrews and Wilson today.