Getting Back Up When Life Strikes You Down – Char Westfall 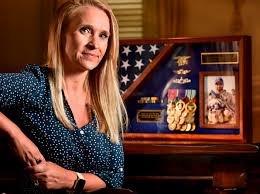 On June 28, 2005, nineteen U.S. service members perished in the mountains of Afghanistan. The author’s husband, Navy SEAL Jacques Fontan, was one of those killed.

The mission, Operation Red Wings, has become one of the most well-known operations in contemporary warfare. Only one survivor lived to tell the harrowing story, resulting in books, speeches, and a blockbuster movie, Lone Survivor. Perhaps more important, the mission created much-needed public awareness and curiosity about the realities of war and survival.

But there have been no books, speeches, or movies written about the other survivors: the women and children whose lives changed forever that summer day. While each widow and family processed the tragedy differently, Char became absorbed in anger and bitterness. Coping with grief was unfamiliar and scary to her. She hated God, whom she had trusted all her life, and blamed Him for losing her husband in such a violent manner.

Before she knew it, she was on the front lines of a battle to regain her own life. When all seemed lost, the kindness and persistence of a neighbor brought renewed hope and restoration to her horribly broken heart in a surprising and refreshing way.

Order her book, A Beautiful Tragedy –  her story as one of the survivors of Operation Red Wings.